To Io and Daryl’s new stage

— The 2nd season of Gundam Thunderbolt has already started.

Ogata: This was the plan from the start. We wanted to let the fans soak in the 1st season and then start up with the 2nd not long after. The staff already had the know-how and workflow established, so with that, we moved forward to season two.

— It’s a complete change that the setting is now based on Earth.

Ogata: We put a close to the ever-floating tension in the “Thunderbolt Sector” from the 1st season and brought the setting to a more condensed space. Although, there is already a pretty significant change with seeing the sea and sky (laughs). The people as well, because Io and Daryl were the focus last time, it allows for the sudden influx of new characters to blossom. Think of it like the start to a new season of foreign drama. 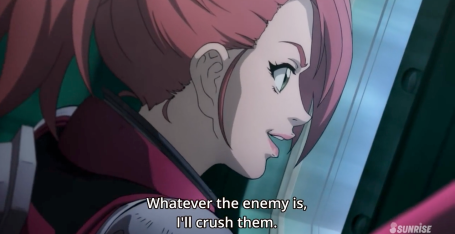 — It’s quite the sudden change in atmosphere.

Ogata: The 1st season was set during the One Year War, and I think the manga creator, Ohtagaki (Yasuo) was very careful not to deviate too far. Starting this season, Ohtagaki takes a step close to the idea of Gundam and even more so into his world. He’ll probably be able to influence many with his expanding world views.

— Using the manga as a base, how did you go about organizing the story?

Ogata: By using the knowledge we gained from working on the 1st season. Following director Matsuo (Kou)’s process, we would switch out the chronological order of the manga and rebuild it to match the 1st OVA. We had Matsuo check over the order, so fans of the manga shouldn’t be too perturbed.

— The mobile suits designs are also much more grounded.

Ogata: With Earth being the setting for battles, that means there is an increase in the situations the mobile suits will face. Many people already know this from reading the manga, but there is an abundance of air and sea battles that I hope they’ll enjoy. In older Gundam series there were underwater battles, but this will be a first for (Sunrise’s) Studio 1 since entering the digital age. Photography work has also come a log way, so I hope everyone looks forward to seeing that.

— Can we also look forward to surprising mobile suits?

Ogata: The first series was drawn with Full Armor Gundam and Psycho Zaku as its mains. This time around, the new mobile suits leave a different kind of impression. Aside from the active role of the Acguy, there will be many suits introduced each episode, so there is a lot of interesting things to enjoy this season. The variety of suits was also enjoyable for the staff as well.

— The new suit that Io pilots, the Atlas Gundam, what kind of suit is it?

Ogata: The Atlas Gundam has to adopt the Zeon army’s amphibious suits’ techniques, so it strikes a different note as a gundam. With its first appearance it takes on fire, but in reality, it’s an interesting mold to get your hands on. By all means, please go out and feel the gunpla for yourself.

— When you think of Thunderbolt, you can’t help but think of how the jazz and oldies have become such a pivotal part of the anime.

Ogata: With Kikuchi Naruyoshi continuing as our music director, it was only the natural progression to stick with jazz and oldies. The oldies were a challenge. Previously all song had been performed in English, but this time we had them all in Japanese. There is a lot of variety, we even had a folk song (laughs). Kikuchi’s thought process is on a different level than ours; it was motivational.

— Kikuchi’s music has become something that Thunderbolt can’t do without, hasn’t it?

Ogata: Very true. I think the music in Thunderbolt is one of its appeals. Run of the mill songs wouldn’t be able to shine like that. The music in this season works to change with each situation and character.

— What do you feel is the most appealing part of Thunderbolt?

Ogata: The mixture of the high detailed and large quantity of mobile suits in motion together with the music is the appeal of Thunderbolt. Especially when comparing it to the tension of the 1st season. We made the 1st episode a purely enjoyable robot anime.

— Care to give a message to the fans waiting for the next part of the story?

Ogata: With this, the 2nd season has started, and that is all thanks to the fans who supported the 1st season. It’s possible to enjoy starting from the 2nd season, but I recommend starting from the first. You’ll be able to get in touch with the wonders of earth and have an appreciation for the fresh air outside (laughs). There are also a lot of suits that will be introduced, so please enjoy this upcoming episode.