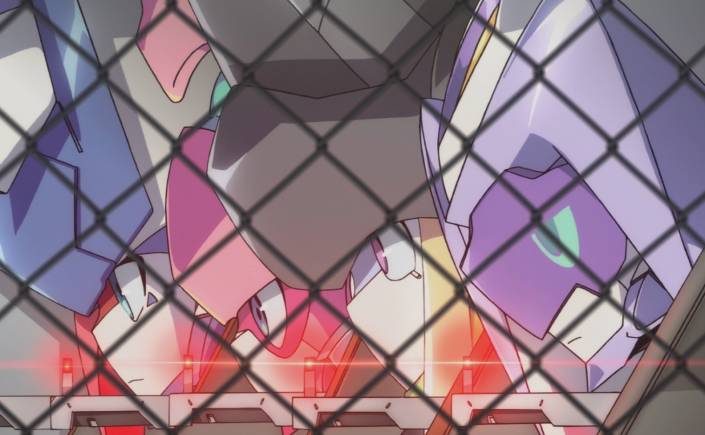 — You’ve worked together with director Nishigori Atsushi on a multitude of works, and both of you joined the industry around the same time. When did you two first meet?

Koyama Shigeto: We met during Gunbuster 2: Diebuster (Koyama: mechanical designer, Nishigori: animation director, key animator), but we didn’t really talk. It wasn’t until we both moved from Gainax and started working on Gurren Lagann (Koyama: designer, Nishigori: character designer) that we got to know each other.

Gainax at that time, to put it bluntly, was composed of a few people from Anno’s era and people from the new Imaishi Hiroyuki (Gurren Lagann: director, FRANXX: action director) era, with Tsurumaki’s influence kind of ever-present. Even though Nishigori was part of the new Imaishi age, Tsurumaki’s style coursed prominently through his veins. I’d also been under Tsurumaki’s wing, so seeing Nishigori pick up his style had me pretty jealous (laughs). On top of that, his drawings are beautiful. There is something more there than just an animator — he has the power to draw these characters that pull you into them.

— So how did you feel when you received the offer to work on DARLING in the FRANXX?

Koyama: Ever since we’d been at Gainax he’d been talking about working on an original robot show — when he finished working on IDOLM@STER he said his next work would be his original, so it didn’t come as a huge surprise. What did surprise me was hearing that it would be a collaboration work between Trigger and A-1. How greedy can one person get? (laughs)

— I heard that you were on the planning committee from square one.

Koyama: Initially, Nishigori requested I sit in as the representative designer, but I think he was looking for someone he could bounce ideas off — like a consultant. With Imaishi’s Gurren team, the character designer, and the chief animation director on the team, I got the feeling that he spilled most of the ideas for the proposal at that first meeting.

— What kind of things did you talk about with Nishigori at the time?

Koyama: Well, first off, Nishigori’s ideas were all over the place. He knew he wanted stuff like a girl born with horns and mechs that required male/female combo pilots, so we had to go through them one by one and figure out why and how they connected. Without getting to the bottom of all that, it’s possible I could have botched the designs. I just kept a steady fire of whys and hows. Nishigori can have strong fixations on his likes, so I needed to pick his brain until I finally arrive at a design that I thought he liked. Probing that much does get a little too at the heart of what makes Nishigori Atsushi, Nishigori Atsushi (laughs). It was because we were around the same age and we function so well together that we were able to work this way, though.

• What Creating a Robot Anime Means To Nishigori

— So, Darling in the Franxx is Nishigori’s brainchild. What would you say is an appealing part of working with Nishigori?

Koyama: He’s a very logical person but at the heart of him is a strong sense of passion. When you look at Trigger works, they all seem to be passion projects, but they are built on a lot more logic and flourish with a seed of dialectic. Gainax and Tsurumaki’s works have that side to them. Quite a bit of Nishigori’s plan remained in a black box (something goes into the box, and the unknown come out on the other side), and that box won’t open until the very end. It’s all very thrilling (laughs). I’m more excited than most because I have more experience working with robot anime than many of the other staff. 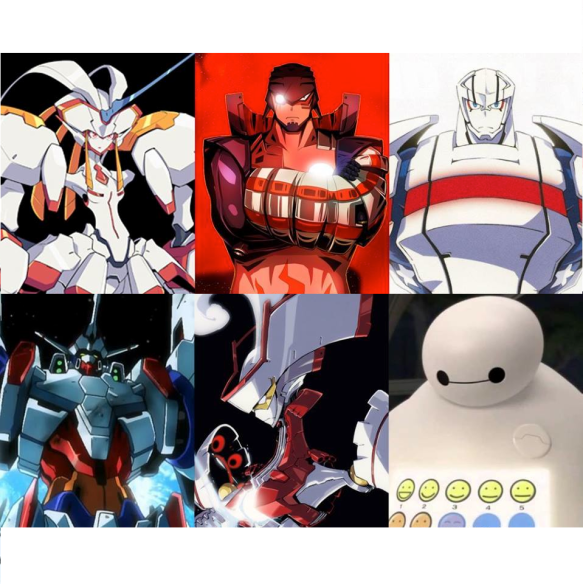 Koyama: When making robot anime, there has to be a self-evident reason for the robots there, or else they’re useless to the story. You can’t have a story that doesn’t incorporate the robot at all.

— Did you iron out the details of the robot’s designs around that reason for the robots?

Koyama: Yeah. At the design meeting, it was Imaishi that offered up, “Well, it’s Nishigori’s anime, so the designs shouldn’t be normal. Maybe something like giant beautiful women.” I thought it was a fun idea, but instead of beautiful women, I thought — why not cute girls? But with this idea as our pivotal point, we might lose the meaning of being a robot anime. That’s when Nishigori thought about what it meant to make a robot anime. The idea of the main character piloting his mech is similar to magical girl shows having transformation scenes. So what was Nishigori’s “transformation scene” going to be? Well, he thought about it and came up with the idea of these boys and girls being idols (laughs). And who better than Nishigori who already has experience with idols. With that, I asked Nishigori to draw up five idols that I then turned into robots (laughs).

— The silhouettes are more mecha than human, and when the Franxx starts up its face is different than the parasites’ face.

Koyama: At the end of the day, animation can only go so far. If you draw a robot’s proportions too similar to a human’s, it will feel too much like a character design. I wanted the robot designs and the character designs to feel different, so I ended up needing to cross-reference Tanaka Masayoshi’s characters to make changes. I deformed the proportions to make them less like a human and gave them manga-like faces that don’t exist naturally.

— So, Franxx are idols that exist on a different level than humans. Were there any orders from Nishigori that got the Franxx to the profiles we see in the anime?

Koyama: Nope, after his original idol designs he left everything up to me. Nishigori and I holed up in a hotel and finished up all the rough drafts. On the whole, the Franxx details were mine, but our animator Iwasaki Shota helped out with facial expressions and poses. Iwasaki joined Gainax later than us and learned under Nishigori, but he’s not just a good animator, beautiful women are his specialty. He’s already worked as a character designer (Punchline), and his drawings are already geared toward that style of designing so I asked him to help out. He helped draw a lot of details.

— Iwasaki also was in charge of the designs for the Klaxosaurs.

Koyama: The base concept designs were by huke and Iwasaki designed off of those. There was actually another reason for putting this all on Iwasaki, and that was to get him to participate in the design meeting.

— Design meeting. That’s where all the designers meet together, draw up concept art while throwing out character and mechs ideas and such with the hope of coming to a concrete decision. It’s something that’s been going on since Gurren Lagann. I’ve heard from time to time there is also talk about scripts and such.

— Nishigori appointed Akai Toshifumi as his assistant director, and you brought in Iwasaki. DARLING in the FRANXX seems to be a work that incorporates multiple generations of staff.

Koyama: Yeah, our design team is such a group of amazing people. Compared to Gurren Lagann, we have a much more diverse group regarding experience, and we stress over a lot more — it’s a bit of a mess when we all come together (laughs). We also have Tanaka this time, and I’m glad about that. It’s a blast having some new blood in the mix, and it’s a huge motivation kick.

— Now, you are credited as DARLING in the FRANXX’s mechanical designer, but you had a lot more involvement.

Koyama: The design for the Franxx was something that came out of Imaishi and the others through our consultations, I took on the role of putting everything together and thus was given the title of mechanical designer. I enlisted the help of many illustrators including huke, Minamino Aki, Gyobu Ippei, and Ueda Hajime, as well as fine-tune the color balance of copyrighted illustrations together with Tanaka (laughs). I was helping out wherever I could.

— Do you think you were able to shine light into director Nishigori’s black box that you were talking about earlier?

Koyama: Nishigori said he didn’t want to leave all the decisions until the very end, but (laughs) well, it’ll be a fresh new story. We’re all excited over here (laughs). This is Nishigori’s original work so the foundation is set on what he wants to do and he still has a lot of things to show us.

One thought on “Newtype Mar. 2018, DARLING In The FRANXX – Mechanical Designer Koyama Shigeto”