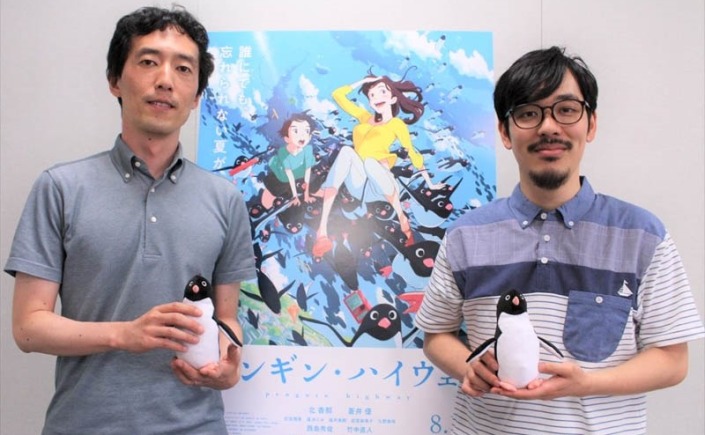 Morimi Tomihiko, known for his novels that sparked the hit anime The Eccentric Family, Tatami Galaxy, and The Night is Short, Walk on Girl, teamed up with Ishida Hiroyasu, creator of Fumiko’s Confession, to bring Morimi’s novel penguin highway to the big screen. Original article from Anime!Anime! released August 17th. This was published before the movie released so you can read without fear of spoilers!

— Ishida, when did you first come in contact with Penguin Highway?

Ishida Hiroyasu: During college, many people recommended me Morimi Tomihiko’s novels. I used their recommendations to binge through his works — everything from Tatami Galaxy to The Night is Short, Walk On Girl. While on that kick my friend strongly recommended me Penguin Highway. Somehow or another my whole world at that time was a barrage of Morimi’s works.

Ishida: It just so happened that I was attending school in Kyoto as well. Many of his works are set in Kyoto, so it was a massive factor in livening up my university life.

— Back then, were you visualizing what you read in animated form?

Ishida: Oh, no way! The thought of me heading an animated adaptation wasn’t something I thought possible. I read it like I would any other book. There was something that seemed different about reading Penguin Highway compared to other Morimi works, though. It might be shameless to say this, but I think of all your works, it was the one that resonated with me the most.

Ishida: Yeah. It felt like the pictures were already there — waiting. If it were drawn out, there was no way it wouldn’t be a beautiful, fantastical, and humorous piece.

— Morimi, how did you feel when you received the offer for another animated adaptation of your work?

Morimi: Honestly, I was pretty hesitant about it. The original novel is cheerful with a smidge of sadness, not to mention dark and eerie at times. I couldn’t wrap my head around how all that would be expressed in an anime adaptation. Penguin Highway is also a story that originates from my childhood. It’s special to me and not something I wanted to entrust to anyone haphazardly. When I looked at the proposal that Ishida sent over, however, I could feel his effort coursing through it. I thought, “I’ll give this director a chance!”

Ishida: Did you really, though (laughs)?

— By the way, what did that proposal look like?

Ishida: There was a lot of material stuffed into it. I recall dividing it into who-knows how many parts and sending them all over. Thinking back, that was pretty rash, if not incessant of me (laughs).

When it came to creating the proposal, I wanted to animate the beauty of the world as seen by a young boy. Penguin Highway was the perfect project for this idea, but I wasn’t brimming with confidence about it from the get-go. It’s such an awe-inspiring novel to me personally that I enviously stepped away from working with it. Even if my sight was set on Penguin Highway, the more I thought about it, the more I worried if I would be able to draw out the full potential of Morimi’s story. In the end, my desire to pursue an animated adaptation won.

Morimi: You were mulling over quite a few things yourself, I see.
I’m only saying this because we’re done, but in the beginning, there were quite a few parts that felt off. I initially turned down the anime adaptation. It was only after I received more material that my initial impression was turned on its head.

Ishida: The first part I sent was Aoyama’s character design. It was a far more mellow design than the current one. His character wasn’t yet showing through as much as it could.

Morimi: He gave off a very idyllic air. If Aoyama’s design was off, then the whole world’s design would be off as well. Having that point of contingency pop up first was risky. The Aoyama that came in the following proposal materials, however, was much better. Ishida’s direction was present. Seeing the proposal from start to finish — with all the corrections and fixes — I think it was good that I initially turned down the design.

— Are there any of Aoyama’s characteristics that you want to highlight, Ishida?

Ishida: Aoyama’s eyes between the first and second proposal changed a lot, so I’d say how his eyes are drawn. At first, we had his eyelids and pupils round and cute. After the revisions, we drew them as you see now — sharp and diamond shaped. When I drew them, I envisioned them as high sensitivity sensors. The world is reflected so crisply in his eyes that everything I might be able to see, he’s able to pick up at an unimaginable range. That was my headcanon, and I’m not sure how I came up with it.

— Morimi, when you were writing the novel, where did the idea for Aoyama come from?

Morimi: Aoyama is a character that sees what I saw when I was a kid. As a child, I lived in the suburb, and I had the wild idea that somewhere in that stagnant town there must be something resembling the end of the world. I always wanted to draw out that scenery and those wild ideas from my childhood in a novel. Before I debuted with Taiyou no Tou (“Tower of the Sun”), I tried writing it, but I hadn’t the slightest idea of how. It wasn’t coming out as spectacular and wondrous as I wanted. After thinking it over, I turned it around and placed focus on what kind of protagonist could recreate my memories and Aoyama popped into my head.

— So Aoyama was born from your desire to create the world from your childhood. Interesting.

Morimi: As I grew with my writing, slowly but surely Aoyama’s point of view came to fruition. I think it was possible only because I’ve written so many novels and have come to understand my writing process. This is especially true for The Night is Short, Walk on Girl. By honing in on what made The Girl’s point of view special the world around her became special too.

— Aoyama is a character gushing with a desire to learn and a dash of maturity. His puppy love for the unnamed woman is something that I think a lot of people can sympathize with. Do either of you have any love stories from your childhood that factored into writing Aoyama?

Morimi: As an elementary school student, the concept of love completely eluded me. Aoyama at least can tell if he has the slightest feeling towards someone. Back then, I never held an understanding of what it was like to like a girl.

Morimi: Oh, that I understood.

Morimi: Yeah, I had a very general understanding of them. There wasn’t a specific woman I tied this to — I was all over the place.

Ishida: Makes sense. Right when I was around the Aoyama’s age, ten, I had a turning point. The memory is a bit fuzzy, but I remember having this epiphany that some of the girls in my class were cute.

Morimi: Hahaha an epiphany, you say. Like, bam, “she’s a cutie.” I guess something similar happened to me.

Ishida: Once I was in 5th grade my knowledge in the matter kept growing. If there was a word that us boys in class found interesting, we would gather in the nurse’s office and scour the books for information.

Morimi: So that was like your second awakening. If we’d proceeded in that far, Aoyama’s story would cease to exist (laughs).

Ishida: That’s why I was entirely on board for Aoyama being in 4th grade.

— You managed to experience that kind of love at the perfect age. Speaking of which, was there anything you were conscious of aside from making Aoyama’s boyhood appear realistic?

Ishida: Stuff like how he treated boobs. I wouldn’t go so far as to say he’s mature about it, but his fascination with them is something special. To do that, we needed to be careful while fine-tuning the realistic and fantasy aspects.

There was also the exchanges with Suzuki, the bully. Suzuki is a rather vulgar little boy. By itself, it’s not interesting to watch, but that toxicity is an essential factor for conflict. If we just focused on the family-friendly points, it would diminish the value of the positive moments, so we had to be careful of the balance.

Morimi: Because it’s a movie, there is no way around having the point of view be a direct bird’s-eye view. This was a troublesome change from the strong first person view I wrote in the novel. No matter how horrible Suzuki got, Aoyama never got peeved, so Suzuki didn’t seem that awful in writing.

Ishida: Suzuki is kind of a brat (laughs).

— Who do you want to see this movie?

Morimi: I want children that question the mysteries around them to watch this movie. In short, I want to show it to my childhood self. The scenery and wild ideas I envisioned are so vividly displayed on screen, it would shock my younger self. Of course, some adults are just as curious, so I want them to see it too.

Ishida: While in production we weren’t thinking about a target audience, but I think I would have wanted to see this movie as a child. A lot of movies that have stuck with me since seeing them in my childhood had terrifying scenes that I wasn’t able to comprehend at the time — this movie embodies that. The goal was to bring wonderous scenes or parts of the story that we wanted to draw to the big screen. The potential was always there. Just as Morimi said, if I’d seen this movie as a 10-year-old, I’m sure I would have been ecstatic.

Morimi: If kids see this towards the end of their summer vacation, they are never going to forget what they watched. They’ll be drawn in like, “what in the world did we just see?” 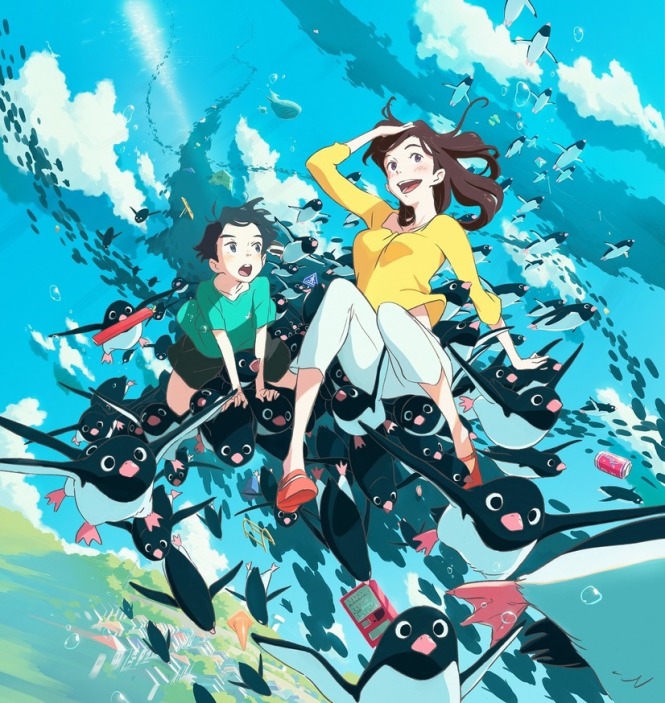 2 thoughts on “The Path to Penguin Highway: Talking with Director Ishida Hiroyasu and Author Morimi Tomihiko”