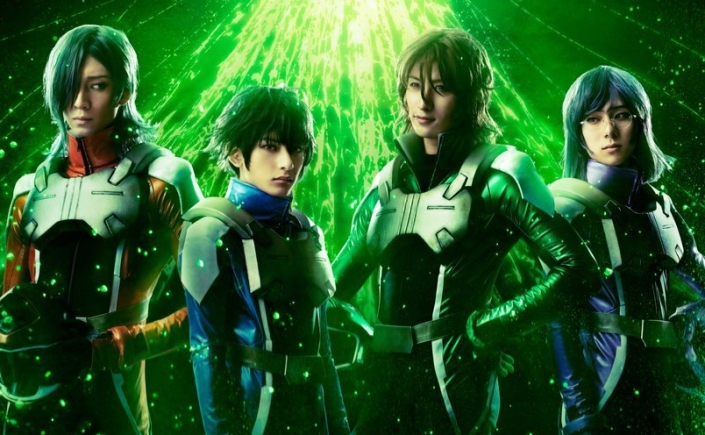 From February 15, 2019, to February 24, 2019, Gundam debuted its first stage play with Gundam 00 Re:Build. Gundam 00 Re:Build is a retelling, or rebuilding, of the first season of Gundam 00. It followed the same general plot lines of the first 25 episodes in a fast-paced action-filled two hours. Because of the two-hour time limit, though, and the obvious restraint of casting actors and such a lot was cut leaving the bare bone plot points to get you through the fight scenes. I’ll get more into that a little later.

The main reason I even signed up to the lottery to get tickets for this was that I—like I assume many people were—was morbidly curious how on earth a mecha story chocked full of intense battles would be portrayed on stage. Bringing a life-sized Gundam didn’t seem likely, and sure enough, that is absolutely not what happened. Instead, there were two ways they emulated the pilots in their mechs. The first was the giant glorified wheelie chairs that were rolled around on stage by stagehands dressed in all black. The actors held their swords or guns while being pushed around and fought others being rolled around. At first, it seemed silly, but it actually provided a nice dynamic where the actors could quite literally kick their opponent while locked in a laser beam (lightsaber) power struggle. There were about ten of these giant wheelie chairs that sometimes didn’t even have actors in them to show that they were enemy grunt suits only. 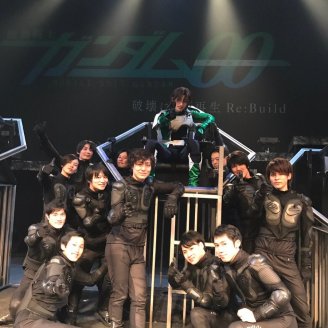 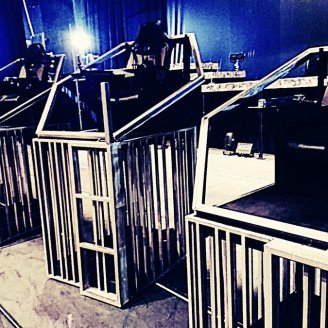 The second way they portrayed mechs was regular old wheelie chairs, which was by far one of the most entertain parts prop wise. The stage had three raised sections towards the back, the left and right sections being a bit higher than the middle. On these two sections the actors would roll out it in, what I’m fairly certain were, office wheelie chairs and attack unseen grunt suits or actors in the giant forestage wheelie chairs. There was no one to push these chairs, so the actors just used their legs to propel themselves around in a semi-dignified fashion. It was only during this time that Lockon’s Haro would move around when talking via another stagehand behind his wheelie chair.

Other aspects that added to creating the illusion of the Celestial Being descending on stage were the use of green light beams throughout the venue to show GN particles. Likewise, Thrones had red light beams. This was great and all until the Celestial Being boys went Trans-Am and also used red light beams. That was all that changed to signify Trans-Am, and it was a bit of a letdown. Personally, I was expecting their giant wheelie chairs to get lights or something, but nope, just the same lights as Thrones. The same lack of change was present when Tieria’s Gundam Virtue revealed Gundam Nadleeh.

Now onto the significant differences between the anime and this stage production. Clearly, it would be impossible to fit 25 episodes worth of characters’ backstories and plot into two hours, so they severely cut anything not revolving directly related to the Celestial being crew’s battles. This was mainly done by axing the more civilian/bystander point of view provided by Louise Halevy, Saji Crossroad and his sister, as well as Marina Ismail. The Louise and Saji aspects of season one were easy to take out, but what was left in was Nena crashing a random wedding celebration. No announcement for a play of the second season has been confirmed, but they are obviously leaving their options open to have Louise join in if necessary. As for Marina, she was most likely seen as a means for Setsuna to develop emotionally and thus could easily be replaced by more Celestial Being bonding. The Union professor, Ralph Eifman also made a brief appearance during his death scene. The first time we were introduced to him was when he was shown being killed by Trinity. I’m pretty sure it’s because they needed to supply some backstory for Graham Aker’s vendetta against Celestial Being.

These cuts were not surprising at all. What did shock me—that admittedly I should have realized earlier from the second key visual—was the complete erasure of all the agents and observers aside from Ribbons Almark. The final fight with Alejandro Corner? Nope, that got rewritten and replaced. Every role that Wang Liu Mei and Alejandro played were carried out by Ribbons. But how? He was behind the scenes the whole time in the first season until the very end, how did they do that?! I hear the questions you’re not asking, and I’m here to answer them. Ribbons played the narrator throughout the entire play until the very end where it was shockingly revealed that he was actually the man behind the curtain the whole time. His pamphlet bio mentioned he was related to the Aeolia plan, but not his alliances or connections with others—probably because it was play-original information.

Now, when I say narrating, I don’t mean off to the side filling in small plot jumps. No, until his big reveal, Ribbons was dancing all over the stage narrating in a very cryptic manner. I had two personal favorites. One was when a battle was going on, he said something then twirled around the moving giant wheelie chairs, gracefully touching them before leaping off stage. The other one was when he appeared out of nowhere, faced the Ptolemaios crew, cast a hand out in their direction longingly, remarked “oh whatever shall they do to survive,” dramatically brought his hand down and did a few flourish-turns before returning from where he came from. It. Was. Brilliant. 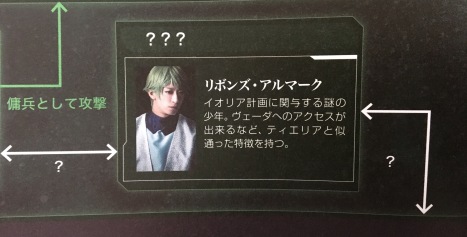 So, they took out a lot, but they also added interesting substantial changes. With Alejandro and Wang Liu Mei gone, Team Trinity needed to have their story altered and oh boy was it altered. In the anime, when Ali Al-Saachez confronts the trio, he kills Michael and Johann right off the bat and steals Zwei. The play has this go down very differently. When Al-Saachez shows up, he asks if the three want to join up with him and his, at the time, secret boss (it was Ribbons). They agree, and the four go on their merry way making things difficult to Celestial Being. This doesn’t mean that Johann and Michael were spared from their anime canon demise. During a later fight between Al-Saachez, Team Trinity, and Celestial Being, Al-Saachez uses the two brothers as shields and sacrifices them to save himself. I’m pretty sure them teaming up was a plot point to give Al-Saachez the new play original GNW-004X, Gundam Thrones Vier. With Alejandro not in the story anymore the final battle then took place between Celestial Being and Al-Saachez in his new spiffy Thrones Vier. 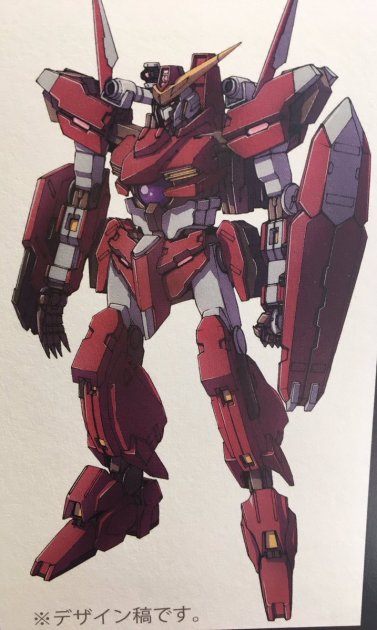 Gundam Thrones Vier Pilot: Ali Al-Saachez
The 4th Thrones unit created from reserve parts for the original units that Ribbons picked up. New parts were also built from scratch to improve the design. It was customized for Saachez making his maneuvering unmatched and showing off his strength. Due to its use of the pseudo-solar reactor, it can go into Trans-Am Taus. 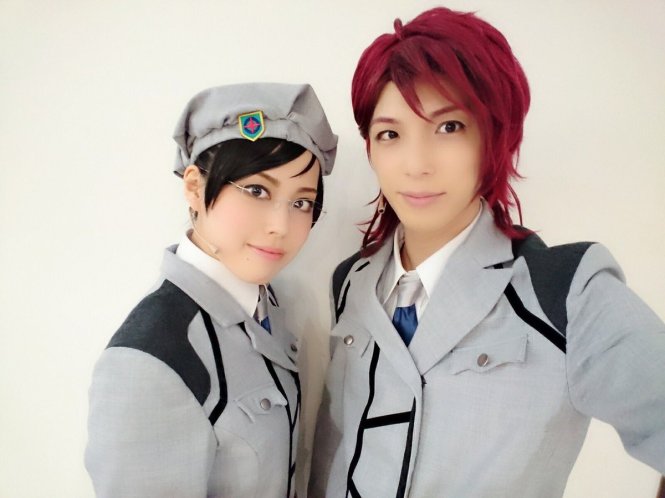 Call me extremely biased if you will, but the absolute best part—aside from the glorified wheelie chairs, Ribbons dancing, and the introduction of a new Gundam—was Patrick Colasour. The play was lead from one fight to the next, with strategic meetings and limited character drama interjecting every so often, but Patrick cared not for this. He was hot-blooded in battle just like the anime and also pined for Kati Mannequin every chance he got, but the timing of his actions was some great comedy in a sea of action. They took his comic relief character from the anime and amped it up 10 times. He was the only character to get special glitter sound effects whenever he smiled and looked at Kati or the audience. They also gave him Amuro’s famous, “Not even my own father hit me!” line after getting slapped by Kati.

In the end, there were a lot of changes made to have the story better fit a live stage performance. Things like changing when and how Lockon learned Setsuna was part of the group that killed his family and Virtue is able to switch to the backup system when they are disconnected from Veda were different, but easily rewritable. The story ultimately ended the same as the anime aside from the introduction—and eventual destruction—of Gundam Thrones Vier. They tried to keep the actors’ faithful to their characters, Ribbon’s actor doing a great Furuya Toru impersonation, but ultimately it’s its own alternate Gundam 00. Sumeragi was far sassier and headstrong, while Hallelujah and Tieria switched voice pitches—Hallelujah was really deep and Tieria was very nasally. It was an experience, and even though I was in nosebleed seats, it was thoroughly enjoyable. If they announce a second season play, I’ll definitely try and get tickets. 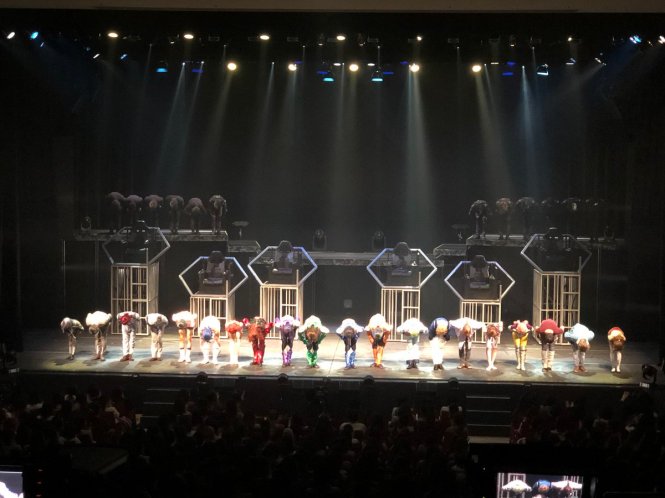 One thought on “Gundam 00 Re:Build The Stage Play”