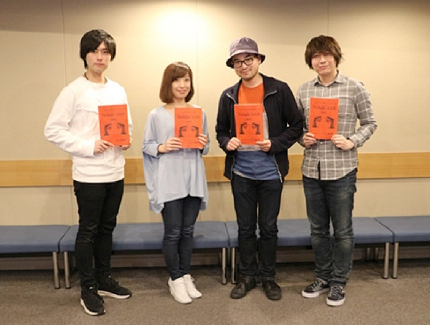 The Twilight AXIS site has put up a series of interviews with the main cast (in order of the picture above: Masuda Toshiki, Shimizu Risa, Sakaguchi Shuuhei, and Ono Daisuke) that initially was released on the Gundam Fanclub app. I’ve formatted the interview a bit differently than they originally appeared. Since each of the cast was asked the same question, despite being interviewed separately, and I mixed them together for simplicity sake, or maybe it makes it more confusing. Either way, enjoy!

Q1: How did you feel when they offered you your role?

Shimizu Risa (Arlette): I was so surprised! I’d wanted to voice a character from Gundam at least once, and my wish was granted. Not only that, but I play Lieutenant Char’s engineer. The pressure was on, but I still enjoyed it.

Sakaguchi Shuuhei (Danton): It felt like a bolt out of the blue. I’ve totally been holding in the need to brag about it (laughs).

Ono Daisuke (Mehmet): As a Gundam fan, having the honor of experiencing Universal Century first-hand is the greatest pleasure but, I also felt a tremendous amount of pressure.

Masuda Toshiki (Quentin): When the anime was decided I felt that the time had finally come, but I acted surprised. I’ve always wanted to pilot a gundam, or well, have always worked towards voicing the main character in a Gundam show, piloting in that way. I never believed this miracle would actually happen.

Q2: When you finished recording, what were your thoughts?

Shimizu: I was crying and screaming so much during Arlette’s childhood scenes that my voice was wiped out by the end (laughs). I got to experience a good kind of nervous recording alongside the veteran voice actors. When it was all over, I felt like I could finally breathe.

Sakaguchi: I’ve been doing this job for twenty years, and I finally get to ride in a mobile suit, the customized red one at that!

Ono: The emotional effect of the Zaku III, seeing the traces of Alex in the Tristen, and the Scharnhorst name drop made it feel connected to the Universal Century. I thoroughly enjoyed recording for Gundam and learned a lot of things that I need to reflect on.

Masuda: Everyone wanted to say “funnels!” at least once! We were so fired up during our breaks like we’d gone back to being children, talking about having to buy the plastic models of the mechs from the show and such. I understood just how much Gundam overcomes the age wall.

Q3: Was there anything, in particular, you had to be careful of while recording?

Shimizu: There are a lot of scenes of Arlette’s past, so I had to put my heart into acting each and every scene as it compared to the Universal Century timeline. Making sure to imagine how old she was and what her connection with Char was at the time. I believe that she owes her life to the colonel, so that made it a bit easier to narrow down how to act her out.

Sakaguchi: Containing my excitement, as per usual! There’s a lot of jumping around the timeline, so I had to be able to switch out emotions like “bam!” to perform.

Ono: The organization between the dynamism of the drawings and the elaborate story. I wanted to perform both of those as best I could, so I checked over every detail of the novel while the recording phase was happening.

Masuda: Never having experienced the phenomenon of being in space I have to put effort into sticking to Quentin’s composure during peak moments to draw out his inhuman coldheartedness. The number one thing I had to watch out for was anticipating targets that held my interest. That kind of composure is a threat. Let see, after that… this is pretty obvious but vowing to myself not to let my feelings as a fan affect my work.

Q4: Do you have a message for all the fans looking forward to the anime?

Shimizu: For those of you who love Universal Century, I think this anime will excite you! Please look forward to it as we race towards the memories hidden in Axis.

Sakaguchi: The other voice actors and I had lots of fun performing this! I’m sure that’ll be apparent on screen, and it’ll make you want to see a full-scale version! I want to see that and perform it so let’s all ask Sunrise nicely (laughs).

Ono: For those who love Gundam, it’s sure to get you pumped and put a smile on your face. It’s an anime that can touch your heart, so let’s embark on a journey to the Universal Century together.

Masuda: It’s something fans have to see. It may have been made rather short, so to complete the novel’s story, but even in that little bit of content, there is a phenomenal story!